The bliss of cooking is that sometimes you mix the most basic ingredients, and the whole is far, far greater than the sum of its parts. Like how flour, sugar, and salt combine to make the softest, chewiest bagels.

The fun of cooking is that sometimes you can experiment with shapes, and you land in seventh heaven. Like the itsy-bitsy pancake cereal that took the internet by a storm back in May.

The glutenfree apple pancakes bring the best of both worlds. Basic ingredients whisked together to make fluffy spherical pancakes so cute they literally scream pick-me-up-and-eat-now.

Yes, spherical pancakes are a thing!

I know that when we think of pancakes, our minds conjure up a soft as a cloud stack with rivulets of maple syrup dripping down the sides. But that’s just one method of preparing pancakes, albeit a delicious one.

The Danish had a very different image in mind when they made pancakes – fun-sized balls. Called aebleskiver, which translates into apple slices, these are light, tiny, round pancakes stuffed with apples.

At least traditionally they were, nowadays aebleskivers are filled with all sorts of things from jams to chocolate chips. How do you cook spherical pancakes? In very special pans, very similar to a paniyaram pan.

Since my paniyaram pan had been languishing in the cabinet for quite a while, I thought, why not bring a nice change to an age-old treat. So, I whipped it out and got to making oh-so-moreish gluten-free apple pancakes.

How to make glutenfree apple pancakes?

For those of you who don’t have an aebleskiver or paniyaram pan, use your usual skillet, to make the traditional flat pancakes.

You can even bake up these babies in a mini muffin pan!

It’s a one-bowl recipe, extremely quick and with a delectable outcome. You simply whisk together buckwheat flour, quinoa flour, baking soda, baking powder, salt, raw sugar, and cinnamon powder. Make sure nothing is clumped together. A well aerated flour mixture will always give you fluffy pancakes.

To this, add psyllium husk (Isabgol) or some flax seed powder followed by coconut oil, coconut yogurt, homemade almond milk, and vanilla extract. The final ingredient is a one big, succulent apple finely chopped and folded gently into the resulting batter.

Unlike regular pancake batter that drips softly, this is thick. So thick that you can even use it to fry apple fritters if you’re not in the mood for pancakes.

Grease your pan, spoon the batter into the cavities, and then cook, covered with a lid. After a couple of minutes, flip the pancake balls using a wooden skewer and cook the other side.

In about 4-5 minutes, you’ll have perfectly golden-brown spheres with crispy apple pieces that hold well so that you know you’re biting into a juicy fruit and not into mush!

Variations of the recipe

Any gluten-free flour that floats your boat will work for the apple pancakes. I’ve used Ragi ( finger millet flour)for my glutenfree banana pancakes before, and it worked beautifully. Or you can stick to regular all-purpose flour or mix it up. Instead of almond milk, regular milk is a great option.

Besides the fact that I’m a bit partial to coconut yogurt these days, I had some at home. That’s why I used it for the recipe. But plain, Greek yogurt will work just as well. Even homemade yogurt will do in a pinch, as long as you drain it.

Because I bake so much, I enjoy adding unrefined sugar to my goodies and even then, very less of it. You can use jaggery powder, coconut sugar, palm sugar, or regular, white sugar – whatever catches your fancy for the day. However, I should point out that the apple’s sweetness will play a role in the amount you add.

Like the usual pancakes we all know and love, these fluffy, airy spheres are meant to be served immediately. A light dusting of icing sugar is all they need, and you can enjoy these bite-sized balls in-between sips of tea or coffee.

A drizzle of honey or maple syrup is another way to serve these piping hot apple pancakes. My kids snacked on them with and without maple syrup, which is saying something. They didn't even miss Nutella - the regular for their pancakes and waffles!

Juicy apples and the thick yogurt impart the pancakes an utterly moist texture, which is why they store well. Just reheat them, and you have terrifically delicious, slightly crisp on the outside, uberly soft and fluffy on the inside glutenfree apple pancakes to nibble on in no time! 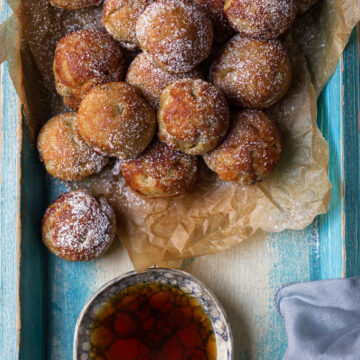 * These pancakes can be made in a skillet too. Just thin out the batter a little bit by adding more milk to make a soft- dropping consistency.
*You can bake these in a mini muffin pan at 180C for 14-15 minutes.
* You can even drop spoonfuls of the batter into hot oil to make apple fritters.
« Banana Baked Oatmeal
Vegan Pumpkin Donuts »