Besan halwa is one of the most popular Indian halwa. It’s an Indian sweet you’ll find in every household. Bursting with notes of cardamom, besan ka halwa is soft, rich, and has a texture that melts in the mouth.

Besan halwa has always been a part of Diwali sweets for us, but it wasn’t limited to festivities. The halwa was made throughout the year. Every time we had a sore throat or cold, my dad would whip up sheera like it was a magical cure-all. His recipe for besan ka halwa was very, very liberal with ghee and didn’t require many ingredients. That somehow stuck with me.

How to make besan ka halwa

WHY TRY THIS BESAN HALWA RECIPE

Because it’s the halwa.

That is reason enough in my book.

HOW TO MAKE BESAN KA HALWA?

The video for making Besan Halwa is included below!

Sometimes good food takes time, and Indian sweets are no different. This besan ka halwa recipe is not heavy on effort, but yes, it begs for time. Don’t rush the process of roasting besan.

Undercooked besan is neither good for the stomach and it tastes pretty awful. Listen to music or chat with someone, if need be, while you roast and cook to give the halwa the time it deserves.

Step 1: I start by dry roasting besan (gram or chickpea flour) in a heavy-bottom pan on medium to low heat for about four to five minutes.

Step 2: As soon as I get the whiff of the nutty aroma of roasted besan, that's when I add ghee.

Step 3: Cook for 15 to 20 minutes on low heat, pretty much stirring constantly.

Step 5: Simmer for 4 to 5 minutes before turning off the heat.

Step 6: When the ghee starts to separate from the nicely emulsified mixture, it changes color to a gorgeous brown, and you get that signature fragrance. Pour the sugar water carefully over it with one hand while vigorously stirring with the other.

Step 7: Whisk, whisk and whisk some more till all the water and sugar are absorbed, and you have a lush, velvety besan ka halwa ready.

HOW TO SERVE BESAN HALWA?

Since I made the halwa as part of my Diwali sweets, I wanted it to be mouthwatering and indulgent. So, I topped it with some ghee-roasted nuts.

Personally, I don’t like any Indian halwa cold. In the winter months, we love it super-hot and at least warm at all other times.

Besan: You can add semolina to this besan ka halwa recipe, or you replace ½ cup of besan with semolina. Whether you add or substitute, keep in mind that semolina (sooji) cooks faster than besan, so keep the heat low and keep stirring.

Ghee: Don’t be put off by the amount of ghee in this besan halwa recipe. Ghee makes the halwa stand out. While you can reduce it by a couple of tablespoons, I won’t recommend it.

Besan is inherently dry, and it loves to soak up liquids. Use too little ghee, and the consistency of the halwa will be off. What you want is a texture that dissolves in the mouth without the need to chew.

Sugar: I used regular sugar, which can be easily replaced with cane sugar or jaggery powder (as I did in my besan ladoo).

Sugar syrup: I grew up in a household where besan ka halwa was made with just water. It was rich enough for us. However, you can use half water and half milk or just milk to make it even more indulgent.

Nuts: I prefer almonds and cashews, but you can garnish with any nuts of your choice. Or be like my mom and add some raisins along with melon and pumpkin seeds. Whatever rocks your boat, even if that’s plain halwa. 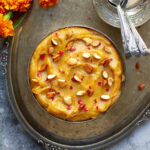