My donut pans have been sitting in the cupboard for months now. The last I used them was for my lemon poppyseed donuts. And for the past few weeks, I can feel them staring me down with ‘bake-with-us’ vibes.

Why the hiatus you ask?

Because with donuts, I can never stop with one. And really, who wants to deal with the guilt that comes after a binge?  I certainly don’t!

That’s why I found a way around the guilt – baked donuts. These fluffy, soft, and oven-fresh versions are a great deal healthier than the fried counterparts.

So, I finally gave in and got to making vegan baked cinnamon donuts! 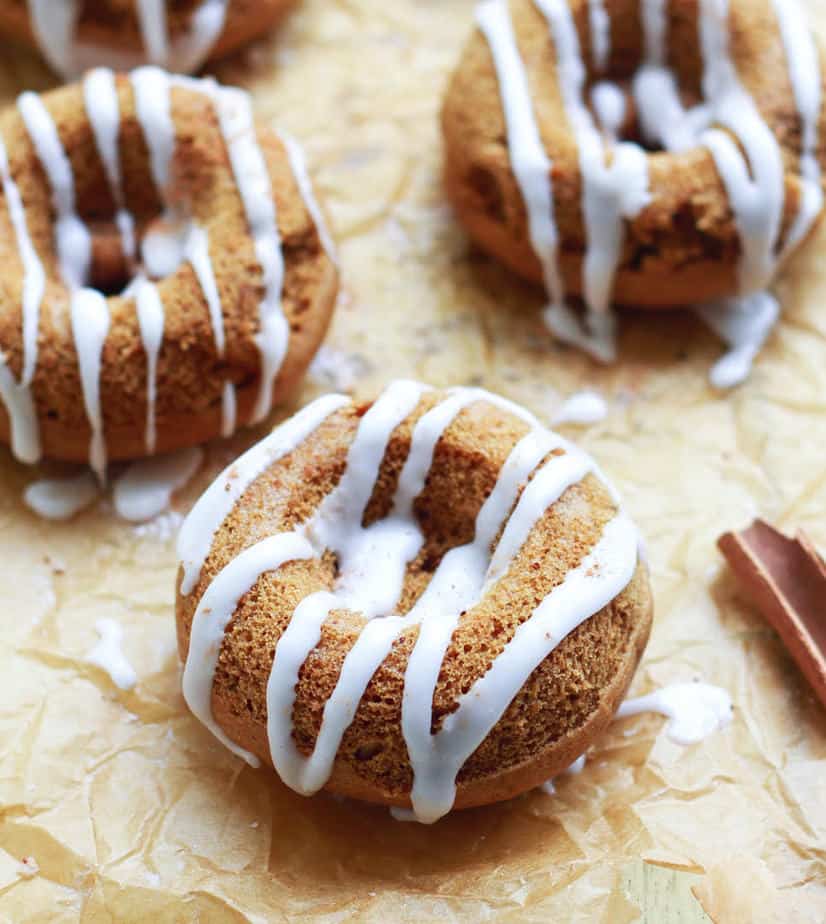 Traditional donuts, as delicious as they may be, involve yeast. You have to wait for the dough to rise, shape, rise, and fry. It takes oodles of time and heaps of effort before you can indulge.

Baked donuts, on the other hand, are the perfect instant gratification tidbit. With no more than 15 minutes of prep and 12 minutes of baking, you have donuts ready to be devoured. And the only special tool you’ll need for this is a donut pan!

The batter comes together in a jiffy by whisking the dry ingredients (flour, baking soda, and powder, salt, sugar, and cinnamon powder) into the wet ones (milk, vinegar, vanilla extract, and oil).

Make sure the batter is smooth and lump-free. The consistency will be thick, much like a cake batter. 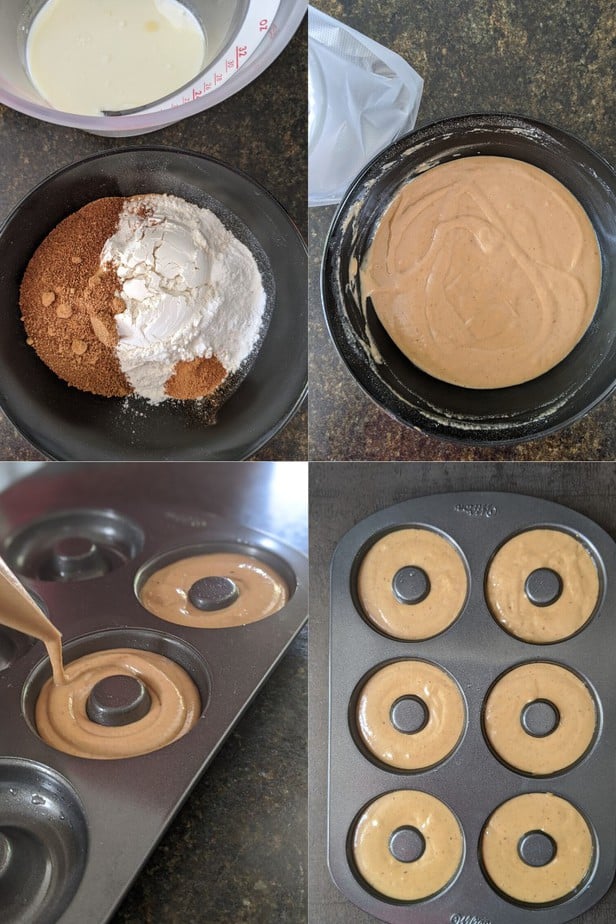 Once the batter is done, spoon it in the greased cavities of a donut pan till it is three-quarters full. This allows the donuts to rise well.

After a couple of trials, I figured out that it’s far easier and neater to use a Ziplock baggie to dispense the batter in the donut cavities. So, instead of a spooning, I fill a baggie with the batter, snip off a corner and pipe the batter in.

Slide the donut pan in the oven and keep an eye out as you really don’t want to overbake. Mine was done in just under 12 minutes. To check if they are nice and soft, skewer them with a toothpick or knife right in the center. 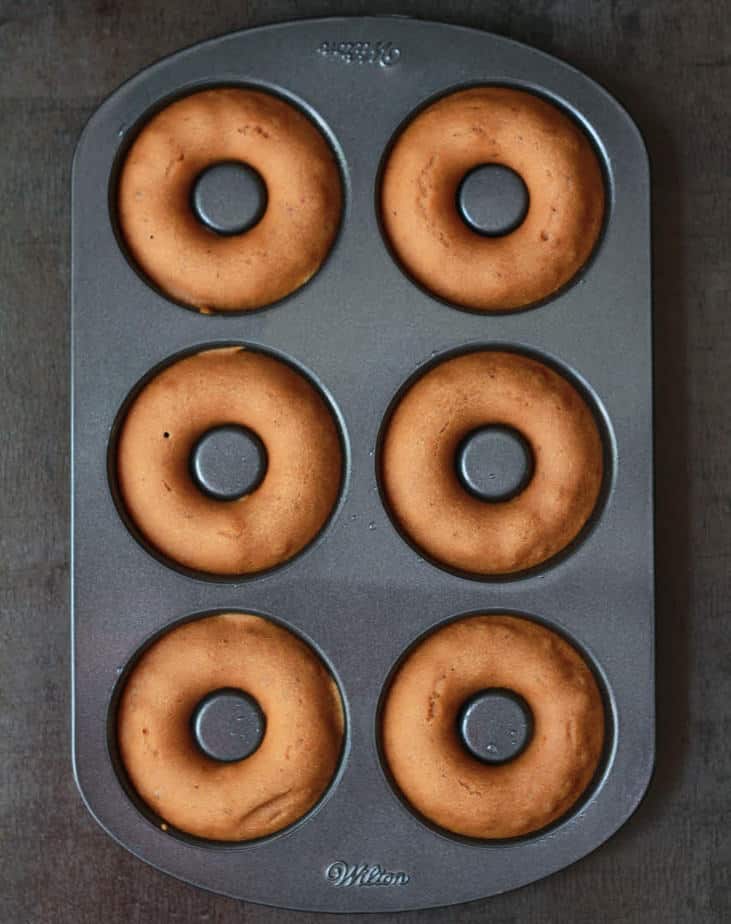 I used coconut sugar to bake the donuts because I love the slightly caramelized taste it imparts. Hence the warm, dark-ish tone to the donuts. If you use regular sugar, they’ll be the usual light brown in shade.

For the milk, I prefer homemade almond milk. You can pour in any plant-based, soy, or even regular milk.  When you add vinegar to the milk, let it sit for 2 to 3 minutes till it curdles. Then add in coconut oil, which is what makes the donuts wonderfully light and springy.

While I’ve used regular all-purpose flour here, you can make the vegan baked cinnamon donuts gluten-free. Just switch it with buckwheat flour. I’ve made donuts with buckwheat before, so rest assured that the end result will be delicious.

If you don't have a donut pan, you can use a muffin tray to bake up these lovely little treats. 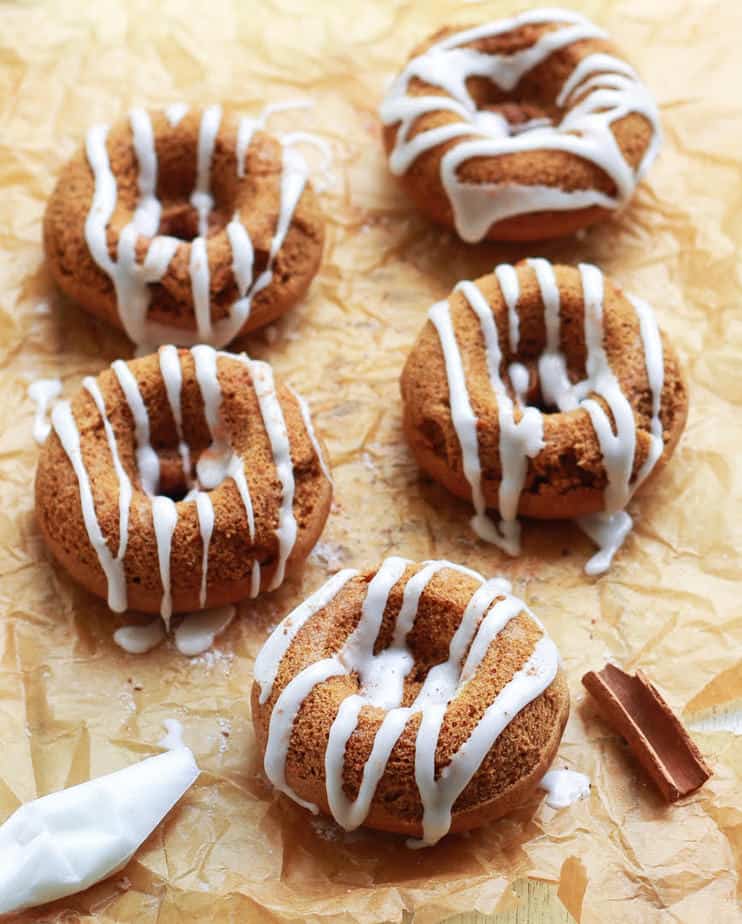 While you wait for the donuts to bake and your kitchen is filled with that wonderful cozy bakery smell that never, ever fails to invite, make the glaze.

I mixed almond milk, icing sugar, and a pinch of cinnamon powder and then drizzled it over the donuts after they had cooled down. To top it off and give the donuts an extra touch, I sprinkled some more cinnamon over the glaze! 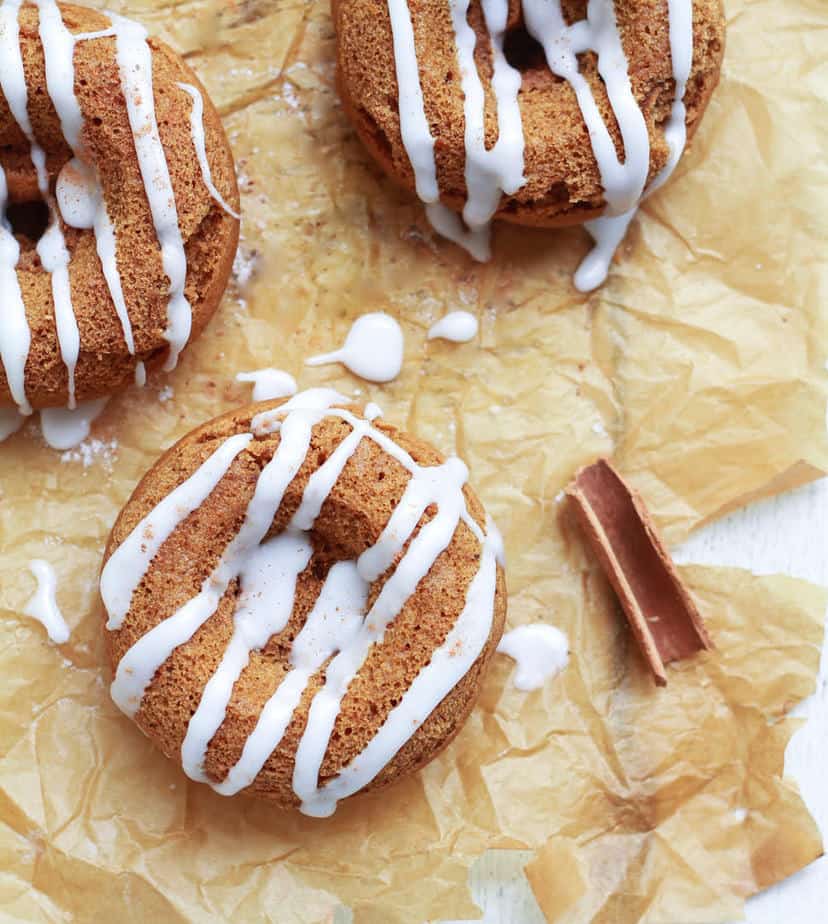 Or you can go the extra mile, as I did for my mini baked chocolate donuts and drown them in chocolate glaze.

If you don’t want a glaze, make a crunchy topping by coarsely grinding sugar and mixing it with cinnamon. Dump the donuts on this powder and you have those dreamy, powdery donuts you see on Instagram all the time. 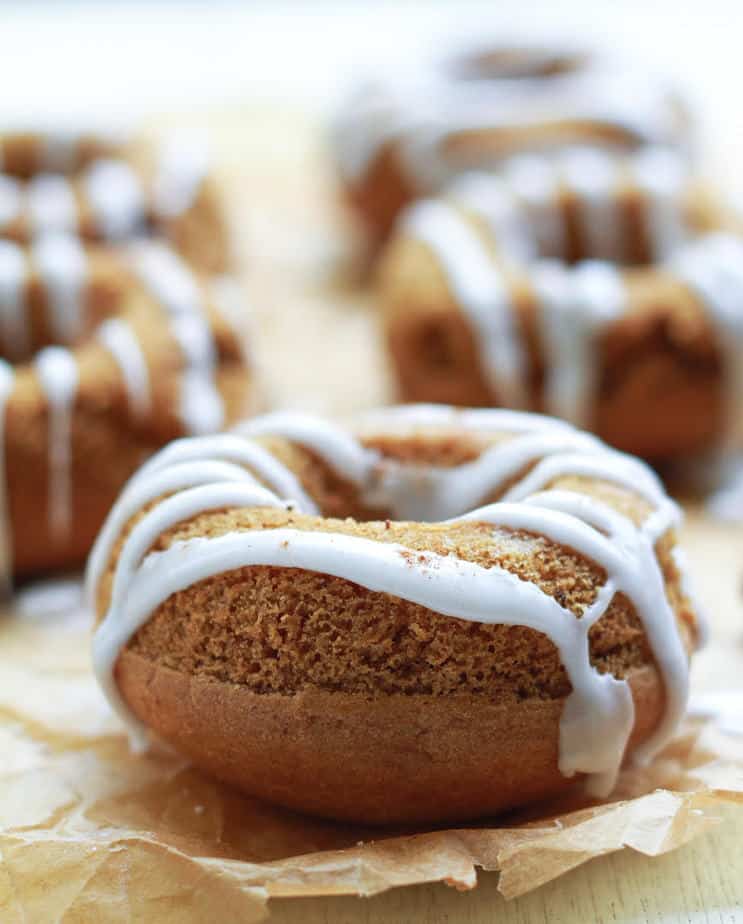 Cinnamon is one of my favorite ingredients to cook with and in the donuts, it works gorgeously. Super fluffy, really soft, and blissfully satisfying, making vegan baked cinnamon donuts is faster than ordering a takeaway from Dunkin Donuts or Krispy Kreme.

Even better, they’re tons healthier and are not cloyingly sweet. Isn't it just nicer to enjoy the pleasure of a donut without worrying about the crazy amount of sugar in them? 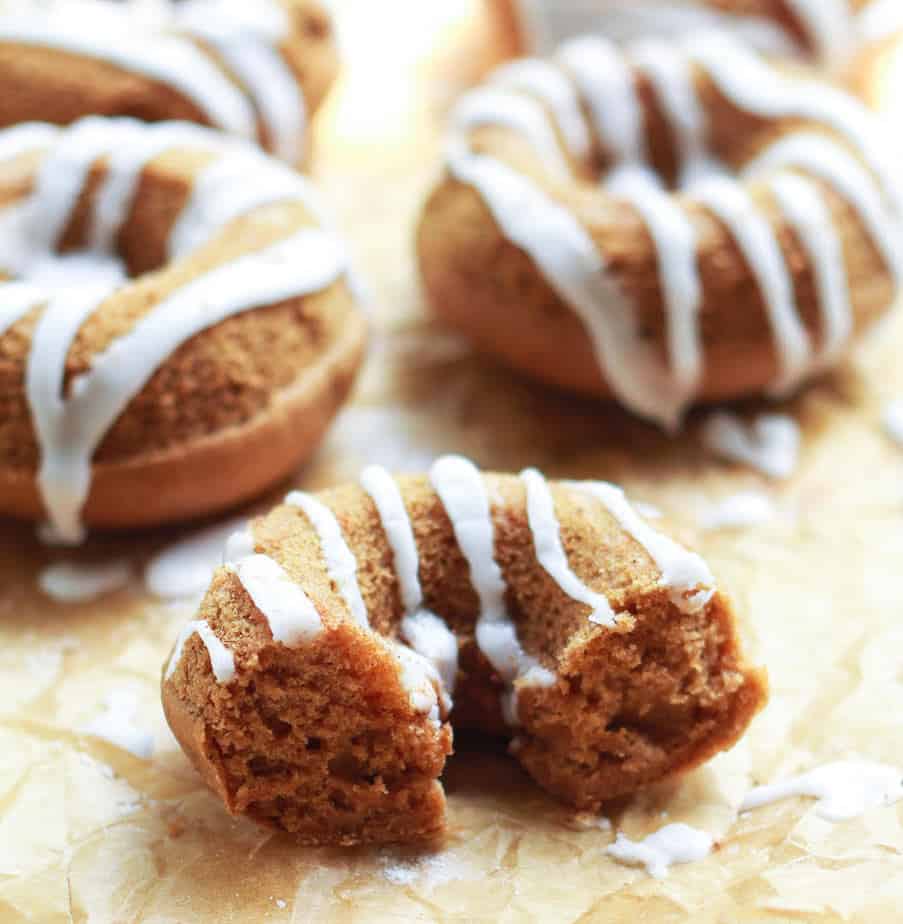 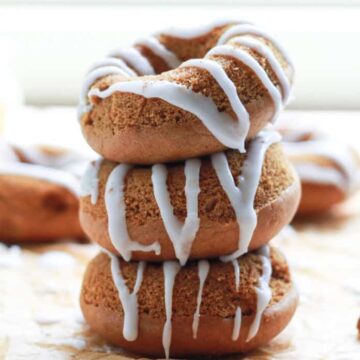