For the past two months, I’ve been wanting to make baklava. But because I want to do justice to the Middle Eastern dessert and give credit where it is due, somehow, I’ve never gotten around to it. Then the kids started making noises about cinnamon rolls during the weekend. So, I thought, why not marry the two and make baklava cinnamon rolls.

In another lifetime, when the US was home, I visited (embarrassingly often) a fabulous Middle Eastern bakery - Shatila. They had the yummiest Baklava I’ve had the pleasure of relishing. So many years have passed, but I can still taste them!

The inspiration for these sticky rolls that borrow the essence of baklava comes from those memories. One of these days, I will make authentic baklava. Till then, I’ll have to make do with treats reminiscent of its flavors.

How to make baklava cinnamon rolls?

Pillowy soft dough intertwined with nuts kissed with floral notes of honey and rose water, the dough for these sticky cinnamon rolls is one I’ve used for ages.

The original recipe for the dough is by The Pioneer Woman and it is a keeper. Trust me. Save it, bookmark it, print it, and use it again and again.

I constantly tweak it and bake variations like braided pesto bread, vegan apple braided bread, pumpkin bread rolls, or strawberry star bread. And I did it again for these baklava cinnamon rolls.

You can now start making the rolls, but I prefer to chill the dough for half an hour. A cooled dough is much more joyful to work with!

Use a sharp knife to chop the nuts finely. If you rely on a food processor, keep checking so you don’t churn them into nut butter.

I was gunning for that rich, complex yet delicate taste of baklava. So, the sticky rolls got doused in a honey glaze.

It may seem like the cinnamon rolls are drowning in the glaze, but don’t worry. The rolls will soak it up. Plus, the notes of both honey and rose water are too subtle. They do not make them overly sweet.

The only rule here is to chop the nuts finely. You want a mouthful of soft fluffy cinnamon-embraced bread with ribbons of delicious nuts running through. Eating baklava cinnamon rolls should not be an exercise for the jaws. It should be a melt-in-your-mouth experience that makes you go, ‘oh my god!’ 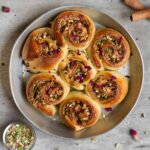