The recipe for vegan apple crisp is super-easy and can be made in a fraction of the time (and work) it takes to bake an apple pie. The bossy cinnamon and shy lemon pack it full of contrasting flavors. The oat-studded topping gives it a perfectly chewy texture, making it the best apple crisp ever!

Why is it that as soon as the weather turns crisp and chilly, I hanker for the eyes-dropping, thoughts-roaming aroma of warm spices in my home? If you find the answer, clue me in too!

Till that moment comes, I am happy baking a vegan apple crisp and basking in a bouquet that makes the heart go giddy with happiness. It has the most delicious caramelly sauce thanks to the apple juice mixed with sugar and cinnamon.

But the game changer is the lemon juice, which adds a note of citrusy lightness. You start salivating even before the apple dessert is out of the oven. Trust me, you’ll want to sit on a couch to enjoy this very, very comforting apple crisp!

Difference between crisp, cobbler, and pie

WHY THIS IS THE BEST APPLE CRISP

Putting apple crisp (vegan) together is a snap

The juicy, lip-smacking fruit is front and center

It’s soft, crunchy, and crackly—wonderful with a scoop of cool ice cream

HOW TO MAKE VEGAN APPLE CRISP?

Step 1: I start with the filling of this crisp apple recipe by peeling and chopping the fruit.

Step 2: Mix them well with sugar, lemon juice, and cinnamon powder, put them in the baking dish, and set aside.

Step 4: Add melted coconut oil to the topping and combine well using a fork till it has a wet, sandy consistency.

Step 5: Evenly spread the crumble topping over the apple filling with your hands and bake for 40 to 45 minutes, until the topping is golden brown and the apple juices are bubbling.

Final step: Let the vegan apple crisp sit for 5 minutes so the juices settle, and then serve warm.

WHAT’S THE DIFFERENCE BETWEEN APPLE CRISP, COBBLER, AND PIE?

The ingredients you use to make the topping define if it is an apple crisp, cobbler, crumble, or pie. Pie is easy to tell as it has a crust topping made from flour, butter, and sugar.

Cobblers have a thicker biscuit topping. Crisps and crumbles are close cousins. While crisps have oats and nuts in their streusel topping, crumbles usually have just oats.

Oats: The apples get a crown of oats in my recipe because I like vegan apple crisp with a chewy texture. If you don’t have rolled oats, use instant instead. If oats don’t rock your boat, substitute them with nuts, and the crisp will pass with flying colors.

Nuts: Any nut of your preference will work like a charm in this recipe for apple crisp: pecans, almonds, or walnuts. Chop them finely and combine them with the apple filling. Raisins are another option if you really want to experiment.

Fruit: Some vegan apple crisp recipes will tell you to pick a particular variety of apples. I say, use whatever apple is in season for you and locally available. You’ll still be absolutely smitten by the crisp.

Don’t have apples? This recipe does wonders with all kinds of fruit: figs, persimmons, peaches, berries, plums, or any other seasonal fruit.

Oil: Melted butter is the only substitute for coconut oil. I do not recommend using any other oil.

Sugar: I used raw sugar, but you can use light brown sugar, coconut sugar, cane sugar or then good old regular white sugar.

Flour: Whole wheat flour is an easy substitute. You can even use any gluten-free flour.

Alcohol: Rum and brandy lend complexity to the sweetness of apples, so feel free to spike this vegan apple crisp with a small amount of either to make it boozy.

Vanilla: Lemon balances the essence of apple crisp, creating a marriage of sweet and citrusy. But if you want to add more dimensions to this vegan apple dessert, use vanilla extract or vanilla bean paste. Incorporate it in the filling. 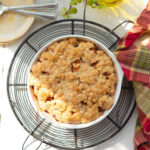 The recipe for vegan apple crisp is super-easy and can be made in a fraction of the time (and work) it takes to bake an apple pie. The bossy cinnamon and shy lemon pack it full of contrasting flavors. The oat-studded topping gives it a perfectly chewy texture, making it the best apple crisp ever!
Prep Time20 mins
Cook Time45 mins
Course: Dessert
Keyword: Apple Crisp Vegan, Best Apple Crisp, Apple crumble Vegan, Easy Apple Crisp Recipe
Servings: 6 servings
Calories:
Author: Natasha Minocha