The buttery cinnamon streusel coffee cake is not just good. It is an obsession that has you reaching for the second and third slice in no time. A genuine melt-in-the-mouth recipe, the crunch from the streusel ribboned in and on the cake hooks you in with the contrasting texture.

Packed with spoons full of cinnamon, the aroma of the baking cake makes you drop everything and just relish it. The best part about the cake? It can be eaten with coffee or tea. The coffee drinkers enjoyed it with their cuppa and I with my tea. We all happily report A+ results.

What is a coffee cake?

Like tea cakes that are bereft of chai masala or tea leaves in their batter, coffee cakes are not seasoned with the rich, deep aroma and flavor of coffee. So why is it called a coffee cake when, in fact, it doesn’t contain any? Well, because it is meant to be shared with family and friends over a cup of coffee.

It’s a light sponge cake topped with a streusel spiced with cinnamon (and sometimes a pinch of cardamom), so the taste comes alive when relished between sips of coffee.

I love cakes, cookies, pies, and really desserts in any form, but what I can’t absolutely stand is the dictatorship of sugar in cloying, overly sweet treats. So, while this coffee cake is packed with sugar in the streusel, in the batter, and in the glaze, it’s not overwhelming, make-your-teeth-ache sweet. I deliberately kept the amount of sugar on the lower side, creating a balance where the flavors shine.

Step 1: Grease your pan. I used an 8" square one and set the oven to preheat.

Step 3: Add very, very finely chopped pecans, and then pour melted butter. Get your hands in and combine (or use a fork) until everything is nicely moistened and clumpy.

Step 5: In a separate bowl, cream softened butter and sugar together until light and fluffy. Add in 2 eggs along with vanilla extract. Beat well.

Step 7: Spoon half of the thick, beautiful batter into the prepared pan, even it out, and then top with an avalanche of crumbly streusel. Don’t use it all because we’re going to pile some on top of it, too.

Step 8: Make a second layer of the cake batter and then top it with the remaining streusel.

Step 9: Press it down slightly and with a feather touch, then bake for 35 to 45 minutes.

My notes on the sour cream streusel coffee cake

Nuts: Adding pecans to the streusel is completely optional. Don’t have them at hand? Walnuts or any other nut you prefer are an excellent substitute.

Add-ins: The easiest (and tastiest) add-in for the batter is cocoa powder to make it chocolaty. Coffee is another option. Who says coffee cake should never contain coffee? Pander to your palate.

Fruits: Blueberries are the traditional choice for coffee cake with streusel. But again, don’t let that limit your imagination. Fold in any fruit you prefer in the batter.

Sour cream: Greek yogurt is an alternative. While it won’t give you the same tender texture as sour cream, the flavor still has that tangy note, and the crumb a little lighter. Homemade yogurt is also an option; just make sure it is well strained because you’ll need that very, very thick consistency.

Glaze: Honestly, it’s up to you whether to decorate the cake or leave it as-is. But a draping of salted caramel would be a delicious choice.

Give the cinnamon streusel coffee cake a whirl. It’s:

Soft and fluffy to a fault

Accompanies a cup of coffee unbelievably

As satisfying to eat warm as it is at room temperature

Not heavy, despite the richness of butter and sour cream

A wonderful recipe to have in your baking repertoire 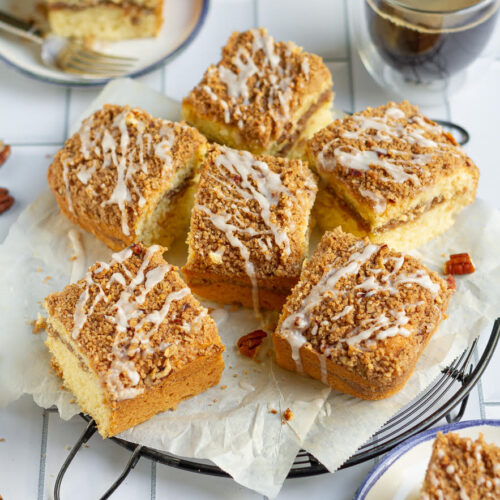