The changing leaves, crisper sunny days, the heavenly scent of cinnamon wafting through the air—fall brings on all the cozy feels. So, please don’t blame me if I go on a spree of pumpkin desserts.

Starting with the quintessential fall cinnamon rolls filled with gourd vibes (get it?)

Mix, rise, roll, and slice. That’s all there is to the recipe for pumpkin cinnamon rolls. And it’s so convenient! You can split the process over 2 days by making the dough ahead of time.

And when you're ready to bake, roll, slather with buttery cinnamon goodness, slice, and slide it into the oven, drizzle it with icing. Then enjoy cinnamon notes mingling with yeasty goodness to your sweet, sweet satisfaction.

How to make the best pumpkin cinnamon rolls

Featherlight and so, so fluffy, you can’t even tell you had one!

Slathered with amazing melts in your mouth glaze

HOW TO MAKE THE BEST PUMPKIN CINNAMON ROLLS?

Yes, these are cinnamon rolls with pumpkin purée, but they don’t taste like the fruit. It adds a lot of character, making the dough soft and lending it a lovely hue and natural sweetness. Plus, pumpkin pairs deliciously with cinnamon.

Step 1: Begin by warming milk, oil, and sugar without letting it come to a boil. Keep the heat on medium and remove the saucepan as soon as the sugar completely dissolves.

Step 2: Allow the mixture to cool to lukewarm before adding the yeast. Set it aside till it is frothy and bubbly, about 5 to 10 minutes.

Step 3: Combine flour and pumpkin purée into the yeast mixture, cover, and then let it rest in a draft-free place until the scraggly dough doubles in volume (about an hour).

Step 4: Knead in the remaining flour, along with baking soda, baking powder, and salt.

Step 5: While you can use the dough right away, I prefer to refrigerate it overnight. It makes the cinnamon pumpkin roll dough so much easier to handle and an absolute joy to work with.

Step 6: Gently deflate the risen dough and turn it over on a lightly floured prep surface the next day.

Step 7: Roll the dough out into a large rectangle, brush it with melted butter, and liberally and lavishly spread cinnamon mixed with brown sugar over it.

Step 8: Starting from the long edge, start rolling the dough into a log, moving towards yourself. Pinch the seam and face it downwards.

Step 9: My eggless cinnamon roll dough was too long, so I had to cut it in half before making 2.5" slices.

Step 10: Place the slices in a greased baking dish. I had to use two to give the pumpkin cinnamon rolls some breathing room. You can use a large one.

Step 11: Let the rolls rise one more time, while your oven preheats, in a draft-free corner of your kitchen (about 10 to 15 minutes).

Step 12: Bake for 20 minutes for each batch if you're doing it in two batches (like I did). If you’re baking the pumpkin cinnamon rolls altogether, you’ll need to adjust the time (add another 5 minutes).

Step 13: The cinnamon rolls with pumpkin filling are ready to serve. But they are just not the same without some glaze on top.

Step 14: Combine milk and icing sugar till you have a silky smooth, light glaze.

Final step: Generously pour the glaze over the still warm rolls and, once it’s settled (about 10 minutes), dig in!

Pumpkin: You can find the recipe for making pumpkin purée at home in my easy pumpkin bread blog and vegan pumpkin donut blog. My preferred style is to steam it and mash it with a fork.

This time I didn’t purée it very finely, so you can see specks of pumpkin. They’ll disappear if you use a food processor to blend the pumpkin.

We don’t get canned pumpkin purée here, but it is a good substitute if available to you.

As for the question of what kind of pumpkin to use for these eggless cinnamon rolls, I say what’s locally available. Any regular pumpkin that you can easily get your hands on will muscle its way into the spiced spirals.

I used a beautiful butternut squash this time, that lent a gorgeous orange-yellow tint to pumpkin cinnamon rolls and made them incredibly soft.

Spice: Most easy desserts with pumpkins have cinnamon in them. These rolls are no different. But, if you’re in the mood, accent the flavor with a teaspoon of pumpkin pie spice to make pumpkin spice rolls.

Or go half-and-half, to make them redolent of the season of cinnamon, spice, and everything nice. You can even completely replace cinnamon with pumpkin pie spice as I did for my cutest pumpkin bread rolls. The choice is yours.

Vegan: These are eggless cinnamon rolls, and you can make them vegan (like my vegan cinnamon rolls) by using plant-based milk and butter. Or replace butter with coconut oil. I’ve successfully used almond milk plenty of times, and it doesn’t change the flavor at all.

Add-ins: Chopped nuts would be an excellent addition to this fall pumpkin dessert. And how lovely would chocolate chips be to make these pumpkin cinnamon rolls decadent? 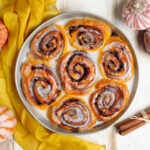