Addicted to cinnamon buns or cinnamon rolls but don’t want to put in the effort of making and then double-proofing dough? This cinnamon roll cake recipe is your savior. Incredibly cinnamony, you get to savor the fiery sweetness in the moist, fluffy, and utterly buttery crumbs of the cinnamon cake, accented with just a hint of crunch from the topping.

Nothing says fall (or celebration) quite like the smell of cinnamon wafting from the kitchen. And when it is in the form of warm cinnamon rolls hot from the oven, it is all the better.

But rolls take time, some pre-planning, and just a little bit of fuss. This easy cinnamon roll cake, on the other hand, is a quicker way to take advantage of the spice that I think is synonymous with comfort.

Call it cinnamon bun cake, Cinnabon cake, or cinnamon roll cake, the swirls of cake and spice, interlaced with icing, unroll more than just a comforting fall dessert. It’s the to-die-for recipe for a holiday treat or get-together.

How to make cinnamon roll cake

THE BEST CINNAMON CAKE RECIPE EVER

It is great for entertaining

It is simply a fabulous, fabulous fall treat

HOW TO MAKE CINNAMON ROLL CAKE?

Step 1: While the oven is heating up, prepare the cinnamon cake roll batter by sifting together the flour, baking powder, baking soda, and salt. Follow it with sugar.

Step 2: In another bowl, whisk yogurt, oil, and vanilla extract.

Step 3: Add the wet ingredients into the bowl containing the dry mixture and then mix until well combined.

Step 4: Pour this cake batter into a well-greased and lined pan (I used an 8-inch one). Spread it evenly using a spatula and set aside.

HOW TO MARBLE A CAKE?

Step 6: Using a spoon, drop dollops of the cinnamon mixture on top of the cake batter. The mounds should cover the entire batter layer but still have gaps between them.

Step 7: Now, take a skewer or a butter knife and insert it straight down till it touches the bottom of your pan.

Step 8: Drag it through the two layers of cake batter and cinnamon roll mixture. As you move the skewer around, be artistic. Swirl to mix the two layers together, creating a marble pattern.

Step 9: Bake for 30-35 minutes or until a skewer inserted in the center comes out clean.

Step 10: While the cake bakes, make the glaze by combining icing sugar with milk and vanilla extract.

Step 11: After the cinnamon roll cake is baked, pour the glaze on it while it’s still warm, ensuring it seeps into every ooey-gooey pocket.

Final step: Let the cake cool and then serve!

Oil: I love to include coconut oil in my bakes, but any regular vegetable oil would work deliciously here. Or you can use melted butter.

Yogurt: If you can’t find plain Greek yogurt or don’t prefer it, replace it with homemade yogurt. Make sure it is hung and drained really, really well. For that extra, extra touch, substitute yogurt with sour cream, as I did for my cinnamon streusel coffee cake.

Vegan: This adaptation of the Cinnabon cake recipe is already eggless. To make it vegan, swap the yogurt, butter, and milk for plant-based options. Another option is to use coconut oil instead of butter, even for the cinnamon filling. 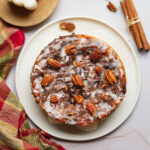 Addicted to cinnamon buns or cinnamon rolls but don’t want to put in the effort of making and then double-proofing dough? This cinnamon roll cake recipe is your savior. Incredibly cinnamony, you get to savor the fiery sweetness in the moist, fluffy, and utterly buttery crumbs of the cinnamon cake, accented with just a hint of crunch from the topping.
Prep Time20 mins
Cook Time35 mins
Course: Dessert
Keyword: Cinnamon Roll Cake, Cinnamon Bun Cake, Cinnamon cake
Servings: 8 servings
Calories:
Author: Natasha Minocha